So it has come to my attention that I have successfully reached 5000 posts without getting killed before then. Initiate Party Sequence. So yes 5000 posts, 40 of which being topics that peeked the interests of members of the forum (except for Rustle, he posts even though he's not interested.)

But I don't know what the big deal is with it. I don't know why I'm announcing to the internet world about it. I mean it's just a number, as 4999 is a number, and 5001 is a number. The number 5000 makes me feel special though I'm not. If it does anything it only proves I wasted my life on this site more than anyone else, thus proving my geekdom. Ha I think I might stop myself while I'm ahead. I hadn't really cared about my 1000th, 2000th, 3000th, or 4000th post as much as I do about this one for one reason or another. I suppose I want to just parody off of Snake's One Year thread; though I have to say, I'm not doing such a great job at it. I think I might do this when I hit 10,000. After all, its just a number. Right?

Oh well, I'll make this thread worth your while now, Party time.

ROFL!!!! XD
I had to show my dad that one. I'd be party cat and he'd so be the dude XDDDDDDD
_________________
Hear that sound? That incredible melody filling your head? That music pumping through your veins? That beat going thump tump, thump thump? It's a song called living life. The artist is you.

That kinda reminds me of this cat XD!!

"Go into the world and preach and publish openly the good news to every creature of the human race..." Mark 16:15

"Go into the world and preach and publish openly the good news to every creature of the human race..." Mark 16:15

Okay so this is my 5000 post thread, and it's kinda lame that I'm counting posts making myself look more and more like an ass by just boasting about my post count, but really to me; it's just a number, like everything is just a number. As this is my 9001st post I realized that it's been a year since I posted this thread. I don't think more posts makes me cooler or better than anyone here. I just like to keep track of how long I've been here and how much I post here. Either in the roleplays, games, or news.

I wasn't just posting to "get to nine-thousand! Ahhhh!" It sort of came to me as a surprise when I hit nine-thousand, but when I did I realized how mundane my 9000th post was Dec gave me the idea that 9001 is better than 9000 for the simple reason that... 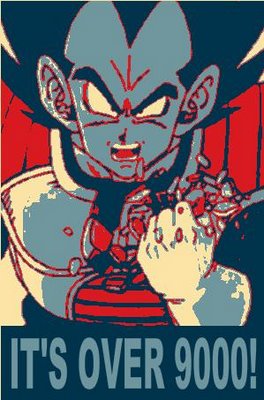 Congrats Merc it's been great to have you here! oDo