Well they're all Adam Hughes and he was doing Batgirl Covers and Vertigo Covers at the time, and I think that cover is pre-reboot... The main series just got into their 10th issue.

Hmm, hard to say. From that review it sounds like it was an issue designed to cue Zatanna up for enrollment in Justice League Dark. It also sounds bad, bad B.A.D.

I lost interest as soon as I read "battle between Zatanna and her cousin, Zachary, who is being controlled by the succubus Yuki-Onna". Why must things force feed pseudo-japanese things to us? Why can't the Z-family just battle a regular Yukionna, what with them being snow spirits who want to violently and painfully murder everyone. It just annoys me that it seems like anything that is A: Japanese and B: Female is automatically enrolled in Succubus School.

Yeah I dont much like the Japanese culture as I use to, nor their weird fetishes. I'm not saying I much like that cover nor what DC was thinking at the time, I haven't read the comic so I can't say for myself. I still like the direction where Batman and Justice League are going though.
_________________

Found this What's wrong with Barbara Gordon as Batgirl and thought it was an interesting and intelligent read; two things you don't normally see in discussions about the short comings of the New 52.

Oh also; Zatanna did get enrolled in Justice League Dark and is currently trying to bang the angst out of John Constantine. So... yeah. That's a thing.

There's a ton wrong with her, but what really gets me beyond everything stated in that is her not so much her function, but her personallity. It pisses me off, and I can't take reading her anymore.
_________________

In the devil's defense I guess Zatanna and Constantine did have a brief thing now and again before N52. But there's just so much wrong with so many characters; this is what happens when fans are allowed to write for the characters without being told that they still need to keep the characters The Characters.

So this is a thing; editorial-whats-good-for-sales-is-not-good-for-comics

And I have to say I think it made a few fairly good points. Don't think I agreed with everything said, but I can certainly feel where they're coming from.

So like Spider-Man, they're turning Kid Flash into a half black half white. I wouldn't call what Marvel did with Spider-Man a good choice, turning him half hispanic, half black, and gay for the sake of diversity.

I think doingth same to Wally West isn't a good idea either. 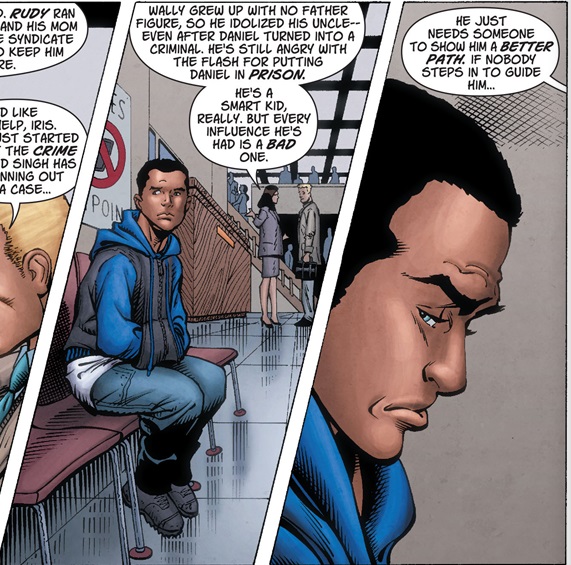