Injustice: Gods Among Us

Injustice: Gods Among Us

In 2008 NetherRealm Studios made a game that caught a lot of people's attention: Mortal Kombat vs. DC, it was special because we havent seen a good Mortal Kombat game since the 90's and DC's characters tend to stray away from murder, something that Mortal Kombat was famous for. So famous that video games were required a rating system now known as ESRB. Look at the next game you buy, E for Everyone, T for Teen, and M for Mature. Unfortunately, the game tanked because DC heroes remained DC heroes and refused to kill and instead had Hero Brutality: where they beat the snot out of their opponent instead of decapitating them or ripping out their spine and beating them with it at their still twitching body. It was also the very first T rated Mortal Kombat game, which turn off a lot of MK fans.

Just last year, NetherRealm Studios follows the footsteps of Capcom's Street Fighter IV and released a pure Mortal Kombat game that brought everything that the series stood for back into the nostalgic hands of avid 90's gamers. The series received good reviews for the first time in over a decade. So what did this hold for their future games?

I can't judge this game off the bat, and they only revealed a handful of characters, I don't know how it's going to play out, but knowing that NetherRealm is getting back on their feet, I may Coughing up a pretty penny if they announce Batgirl, Black Cannary, and Nightwing.
_________________

Yeah, the idea of a DC-themed fighting game is just unrealistic because none of the heroes really spend that much time fighting. I borrowed Arkham asylum from Mame and have been a little annoyed with the boss fights because very little of them is actually fighting, it's figuring out how to fight the bad guy and then doing that, perfect for Batman, not so great for a video game. (I can't tell you how many times Bane killed me before the game revealed I could jump on him while he was dazed, I expected to just chop the cords with batarangs like Batman does in, like every instance I've ever seen him fight Bane.)

I could maybe see a God-Of-War styled Wonder Woman or Superman fighting game; where Diana is fighting off the swarms of whatever as Hades/Ares attempts to take over the world or Clark punches back the alien battle ships and their death rays, or even more adventure styled games where it's essentially the same plot but other characters show up in to help out in the Halo-style reinforcement drops, Booster Gold, Green Lantern, or J'onn J'ozzs could help out Superman while Diana could get support from Artemis, Hipolitia and maybe even a Wonder Girl or two, but one-on-one fights... I mean, how much does that even happen in the Comics?

That actually wouldn't be a bad idea, the Wonder Woman game, I feel that she's an amazing character that the general public doesn't really like. Whenever I talk Wonder Woman it seems like people dont really like her. If we had that sort of hack and slash game with good controls and upgradable skills with larger than life boss fights, I feel that people will be more willing to accept Wonder Woman as a character. It seems like DC themed games have potential but never really were successful except for the recent Batman games, and even then all the prior Batman games were horrible abominations to the characters.

Cameos from other heroes would be a big step forward, I am anticipating Superman in the next Batman game, and if any other DC Hero stars in their own title it would be nice to see some Justice League backup.
_________________

These days the DC gaming scene is pretty much just DCUO or whatever the acronym for that horrible MMO is.

Though I'm not sure a God of War style game would be any better, I think Arkham Asylum actually had a good play style though it was a little heavy on the combat for my tastes, I like to strike from the shadows, for I am The Batman *swoosh*

But something like that would be perfect for Wonder Woman. Replace the Blackgate thugs with Cult of Ares members, the Titan mutants with Minotaurs or similar creatures and the Batclaw with the Lasso of Truth. Heck Diana could even kill people, substitute light gore and a sword swinging bootilicious amazon for Detective Mode, and you've got a game I'd look twice at.

I've never actually played DCU Online, but I keep seeing the advertisements. I didn't see an MMO working for DC. I thought it would just be better if they had a multiplayer Justice League game.

Nightwing and Cyborg announced for the game at Comic Con.

So, picked up Injustice last night and wow, Cyborg is actually voiced by Khari Payton. He screams "Booya!" everytime you win a match with him. It's really Batman and Teen Titans geared.

Raven would be one of the reason for me to get the game.. IF ONLY I HAD AN PSP/XBOX. GAH 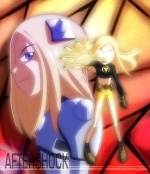 Nope, it isn't. And I have seen game plays of it and it looks awesome, how you can interact with objects in the background and stuff is pretty cool.